The Boar Boyz are complete! 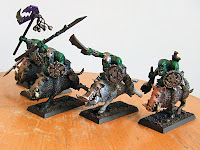 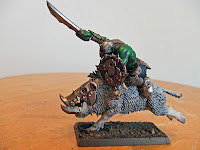 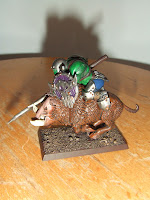 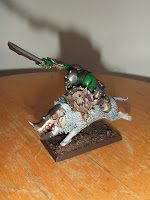 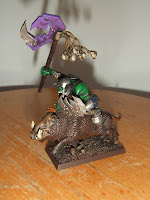 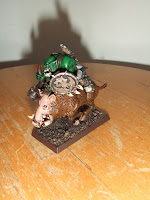 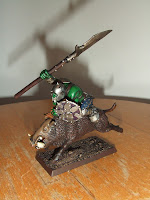 I had a lot of fun painting these guys. I based the white boar on the God Boars from the Ghibli film Princess Mononoke. I love that they came out so well... I just wish I could take a photo that really showed this! I've had a lot of compliments from my boyfriend and his mates, too, which has a been a real boost.

My boyfriend has bought me Gorbad Ironclaw with the proceeds from his Ebay adventure, and he has now been put together. Which leads me to a tip for beginners. DO NOT BUY METAL CHARACTER MODELS. That is unless you're prepared to take it back into the shop and beg them for mercy (and/or a little help putting it together).

Fortunately, my boyfriend is pretty handy at these things, but because of the nature of casting metal, they can need quite a bit of chiselling and the use of something I know as "green stuff" which is a modelling putty used to fill gaps and make the models fit together a bit better in general when they've miscast.

With Gorbad we were fortunate that despite our first thoughts, he wasn't too bad and no curse words were uttered (which is a measure of difficulty in our household!) and so now he's all undercoated and I'm hoping to start painting him today! Good times, see you on the other side
Posted by soraneko at 09:00 4 comments:

So, I had my birthday last week. Compared to other birthdays it wasn't too bad. I opted to work that day, mainly because I'd just sit at home watching TV all day anyway, so why bother using up holiday?

However, my boyfriend was super-awesome! We had agreed that, instead of me sending him off with a list of demands, he should take me shopping once we get paid. He thought this was a great idea (weird, huh?) and so I didn't expect to get anything from him until this weekend… but when he was about to leave for work (at 5am) I heard scribbling, so as soon as he left I ran out to read the note. I like hand-written notes. And I not only had a note saying ‘Happy Birthday’, he'd got me some Orc Boar Boyz to paint up! So that was a really nice surprise. This was then made even better by him buying me a birthday badge to wear at work because I'd said I'd like one AND a small cupcake because I was joking around about how mum wouldn't be able to make me a cake for my birthday because she doesn't have an oven at the moment... something that could ONLY happen to my mother.

So yeah, this is just an entry to say that I have some Orc Boar Boyz, which should be a LOT of fun to paint. I have also finished seven Night Goblins now; 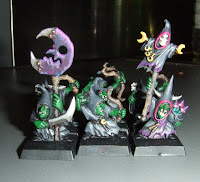 Aren't they amazing? This lot are bow-bearers, my standard bearer (a character who is carrying the standard/flag which is a symbol of the troop’s allegiance, which makes the unit fight on harder for as long as it is left standing... according to the weight tome that is the Warhammer rule book) and one of my shamans. Aren't his mushrooms adorable? I also love the way I've painted the standard, which I've just done by mixing up a purple (I wasn't happy with the one I had) and gradually making it lighter ad lighter, dry brushing the colour across the edges to make it stand out. The suggested colours are more based around red, but I prefer purple and my boyfriend didn't seem as upset by this as he was by the blue for the spiders, so it's all good! These special characters are meant to stand out, which is also why I have taken more time on the robes of my shaman.

Next update will probably be when I have done my Boar Boyz, who are currently built and undercoated, waiting for some colour!

In the meantime, if you’ve found this blog because you’re interested in Warhammer (hey, it’s possible? Right?) then my boyfriend has put up some rare models on my Ebay account, please go take a look if you’re interested in some very hard to find models!
Posted by soraneko at 09:26 No comments:

Well, I haven't updated for a while because... well, because nothing much has happened with the Orc and Goblin army and I haven't really done much else of note! However, its nearly my birthday (Tuesday, 3rd August) and I'm all excited and reading other blogs and thought I should update... therefore I think I'm gonna insert y cute customer quote for the week;

Earlier this week I was chatting with a young lady who had brought in (I assume) her little sister. She asked me where the train station is and I gave her description, finishing with "...and you'll see a big car park, it's right there." Her little sister looked up at me and said "I like car parks," and when asked why said it was "Because you get to pay at the parking thingy." One day she'll understand why this made me smile so much!

On a further note, later today I will be taking my boyfriend and some of his 'geek' friends to the Boston Games Workshop, where another friend has just opened his first shop as manager! He had been a 'full-timer' at the Lincoln store for a while and I think he's been training for months going back and forth, so it's quite nice to see that he's gotten what he wanted! I'm hoping to make a start on my Night Goblins while I'm there.

The Spider Riders are all finished and look a little something like this; 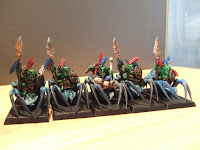 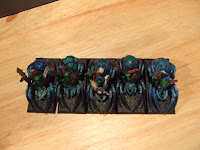 I love them! They look slightly different from each other due to the time left between them but, hey, they're spiders!
Posted by soraneko at 08:47 No comments: