I have decided to try to get over my fear of painting huge, flat areas and chose to build the orc on the boar as a standard bearer. It wasn't an entirely successful exercise, but it doesn't look as awful as I was expecting, which is a bonus! I have also realised that I forgot that I hadn't done the eyes on the orc and his boar, but didn't want to do that and re-take the photos. So here we are; 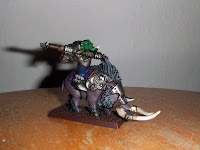 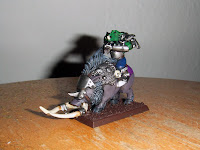 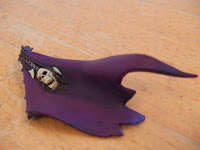 In the set was the option to also create an Orc Warboss, who could have been on the boar but mine is on foot with a big choppy axe! Like so; 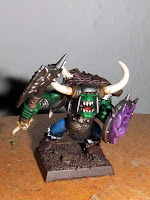 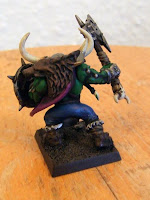 I have also decided to get a picture for you guys of my Night Goblins so far… it's slow progress because, well, I'm not actually doing them for an army. So there's no point doing too many of the boring bits and getting fed up, really! 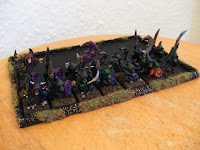 That is 5 with spears, 5 with bows (one's missing cos I didn't want him sitting on his own), 3 heroes, one shaman and one banner. I have noticed that the guys on the right of the picture need their eyes doing in red. I forgot I was doing that when I did them - oops! Isn't the little squig cute?

On a final note for this entry, have people seen the new Giant Spider Games Workshop are bringing out? Looks like a major painting project to me. I'm looking forwards to investing in one of those beasts. There are a few other new bits I like the look of, but he's the main one. A bit daunting (and he makes my skin crawl a little...), but he should be a lot of fun. Or could it be a she...?
Posted by soraneko at 17:44

i found a spider that looked a bit like that in the corner of the redroom... still a bit freaked out by it...

Did it have little forest goblins all over it? The model is huge, I doubt your spider was that big!