Well, since Wednesday I have been at my father's house, revising. Well, I say that I was revising, but there was a lot more that happened too. Such as being taken out for meals, cheering up friends, chatting on MSN, worrying about Skep...

Yes, you read that right. Skep also drove to his mother's this weekend. This gave me a good break of time to do revision in, and I did, I was good. But then realised he had taken way too long and as I was thinking that I should call someone, I got a message off of his dad asking if I'd heard from him. Now, unfortunately his phone wasn't working that day either. At all. So calling HIM was futile, and his mum hadn't heard from him at this point... there was a lot more worrying and message sending before he managed to safely get to his mum's. Well... HE got there safely. His car is another matter entirely... 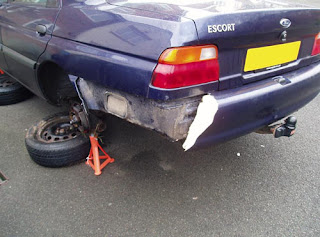 Apparently he turned too quickly into a corner when he was getting close to his mother's and managed to tear off the wheel and body work... it's gonna cost him a few of hundred pounds to get it fixed and get it to the places that will fix it. Much fun.

So now my boyfriend is pretty chronically poor due to being indebted to his mother and father and probably still considers himself indebted to my father too... no pretty things for Sky or Skep for a while (well, from Skep anyway)

I came back to Unihome yesterday evening, when I was flooded with people doing work and being stressed. So I awe-struck them all with my lack of stress and sorted my room out before settling down to chat to Skep a bit while looking at some notes for today's exam. I realised halfway through my time at dad's that I hadn't brought any notes for this exam, but found some Powerpoints, which I read through a bit and hoped they'd help. Then when I was here I looked at some legislation. This morning I also looked through the legislation some more before looking up a few diseases and stuff. At this point I was getting a little stressed because I was convinced I didn't know enough to answer any questions and I'd be screwed...

I walked to the college, which was nice as I haven't done that walk for a while. I got there 15 minutes early, which was also nice as I then searched for the room I was in because it wasn't a normal exam room. I then sat outside for a while, partly just to have a seat and partly because I'd worn way too many layers and therefore was a bit warm. When I got there I saw Julia and Ashlee - Julia looked happy! I kind of looked over a couple of times and she didn't really notice me, so I let her be, figuring she wouldn't want to see me.
When I walked to my exam room for the second time there was a couple of people there, including Carly, so I stood and talked to her about the weekend and life. We usually have an hour to talk about pretty much everything and it's really cool, but we've obviously not had that for a while so it was good to catch up. The conversation then moved on to the exam and we were bother pretty worried about it. Everyone was, actually, all pretty underconfident - at least I had good reason to!

The exam was actually a LOT better than I expected. After the first 30 minutes it even went quite quickly. The questions were amazing. Obviously, the three I didn't answer (you need to pick three from six) were ridiculous, but there was three pretty perfect ones. One on domestication (which one of the Powerpoints was about), one was on infectious diseases (which I had been reading this morning) and one on behaviour (which I could make up pretty easily after reading lots of books on cats recently). So I think I might have actually done a lot better than I had predicted before the exam! Brilliant! I actually text Skep afterwards to thank him, because he'd yelled at me for not revising this morning, so that motivated me to read about those diseases I wrote about

And then I walked home. On my way out of the building I saw Julia again and she said hi and asked how things were. Was nice and friendly, then she and Ashlee disappeared and I came back here to sort my room out a bit and talk to Skep... his mates Jen and James have fallen out quite badly today over her being a bit immature. Should be interesting if they stay fallen out, always wondered what would happen with Jen and Skep at that point... we shall see. I don't believe that he'll do anything, I'm just more than a little cautious of her and her sneaky ways

And on a final note, I've finally heard back from Weirfield Wildlife Hospital. I wrote to them at the beginning of the year to ask if I would be able to do some volunteer work there. They've let me know they'd be very grateful for the help and just to fill in the form they e-mail to me. I think they thought that I lived in Essex, which amused me. The idea that I'd go all the way to Lincoln for that experience! I hadn't realised they were big enough to have a website and stuff though... granted, not a very nice website, but a website none-the-less, check it out:
http://www.weirfield.co.uk

And now I shall eat before looking at and for more note for behaviour. I have the day off of exam tomorrow, then one each day until Friday. I get excited everytime I think about Friday and the week following. I really hope Skep and I have a good week, it should be good
Posted by soraneko at 19:02

Glad you didn't hate the exam. Hope the rest of the week goes as well.